Known as the greatest city in the world, New York City has been deeply affected by international migration with a contemporary immigration population exceeding 2,000,000 (Bloch, Matthew & Gebeloff, Robert). Dominicans and Panamanians are but a few of many immigrant groups maintaining strong ties between New York City and their countries of origin.

On May 14th, Mayor Bloomberg signed the bill, presented by City Councilwoman Ydanis Rodriguez, which renamed 159th Street through 218th Street in Uptown. The passage of the bill commemorates Afro Latino sailor Juan Rodriguez’s migration to Manhattan as the first non-native and Dominican national to migrate to Manhattan, New York in 1613. (Feiden, Douglas).

According to director of the Dominican Studies Institute, Ramona Hernandez, “He was a very early predecessor of the large Dominican population that thrives in the city today” (Feiden, Douglas). This northern Manhattan community also has celebrated the Dominican independence parade since 1982 with…

On October 30, 2013, author, Anthony “Tony” Polanco, boarded a nonstop plane to Santo Domingo, Dominican Republic with a limited amount of copies of his first publication. This illustration, entitled Verses from the Diaspora, was officially released in the Dominican Republic on October 31, 2013. What is this book and why is it important? Verses from the Diaspora is not one person’s story but a collection inspired by the many voices of the African diaspora in the Americas and throughout the world. The collection of original poetry pieces is expressed in English, Spanish and Portuguese. It reveals  the reality of African descendants from the favelas of Brazil to the streets of South Central Los Angeles with brutal honesty. The roots of the book’s origin traces back to the author’s time in Valladolid, Spain in 2008 in which he noticed the discrimination of Africans, Afro-Latinos, Afro-Brazilians and even Afro-Indians. Literary inspiration includes the works of  Nicolás…

Note from BW of Brazil: The story involving the young black male who stripped naked and tied to a pole by his neck provoked outrage from communities around the world who noted a certain similarity with the way black youth are disrespected, lynched and killed in other parts of the world. The funny thing about Brazil is that it has managed to escape worldwide scrutiny in terms of racial inequality and social apartheid. But this is surely to change as the nation that seems to care more about spending billions of reais on the World Cup rather than its population, continues to attract worldwide headlines because of its ill practices that “coincidentally” seem to always happen to brown-skinned people. Below is a follow-up report on the investigation and what has happened since this latest shameful event occurred.

Dr. Petronilha Beatriz Gonçalves e Silva, Ph.D in Education and Humanities, is a researcher and professor of Curriculum & Instruction and Ethnic-Racial Relations at the Federal University of São Carlos (Brazil). She served on Brazil’s National Higher Education Commission (2002-2006), and contributed to the development of Brazil’s National Curriculum Standards for Ethnic-Racial Relations and for the Afro-Brazilian History. Her current research focuses on: international research on epistemology of African roots; overcoming racism in schools; research agenda in Black education; human rights; social praxis and educational process; and curricular politics.

Her studies and theories on education are helping to pave the way for a re-assessment of methodology in teaching Afro-Brazilian children. The interview below is from March of 2002 but even 10 years later it provides a great introduction to her thoughts and ideas of improving the educational achievement of Brazil’s black population.

I met a woman whose mother was Brasilian and came over to the States in the 1930s or 1940s. She’s here searching out her family history.

It was meeting her at an amazing event of predominately African-diasporic women that I was reminded how beautiful Black people are, how loving we can be, how funny we can be, how a mess we can be … and everything else, especially when we’re in spaces, safe spaces, fun spaces, loving spaces, intellectual spaces where we’re allowed to be human. We give ourselves the permission to be human with dignity and laughter in societies that have systems of inequity and disenfranchisement.

The inspiration is with me.

This quote is from Walter Mignolo discussing Gloria Anzaldua‘s position of critical mestiza consciousness. One thing that is implied in this quote is the role of power in being able to institutionalize this prototype’s way of ‘knowing,’ and therefore when groups/individuals go against said institutionalizations there are consequences (some legal, which could then lead to criminalization, violation of human rights, etc.). Even the described prototype person can help dismantle the ideology associated with the prototype. It is a task for all of us.

Being in Brazil for near two months (collectively) has forced me into conceptual understandings that I would not have had prior. It is true of course that ‘Latina/o’ as a concept only truly makes sense in the U.S. (I’ve had the toughest time explaining what a ‘Latina/o’ is and the social implications of such a classification while trying to be as a concise as possible about the history of Latina/os in the U.S.) Latin America in all its continental glories (again) of course focuses on national identities just as U.S.-ans would when discussing ‘North Americans’ or ‘Norte Americana/os.’ The key difference in the U.S. is that massive migrations have occurred from Latin America that make many ‘Latina/o’ communities see particular commonalities in each other (even when they can also see difference). Also, because the U.S. gaze places sameness on ‘otherized groups’/ groups it doesn’t understand, there’s a multi-layered reason why Latin Americans *become* Latina/os in the U.S. On top of this complexity, you *have* to ask when and where does Latin American racialization come into play for U.S. ‘Latina/os’?

It is not that Latin American African-descendants want to be seen as Latina/o for the sake of being seen as Latina/o. But, the opportunities or protections or similar experiences related to language and marginalization also makes them a part of Latina/o struggles in the U.S. However, AfroLatina/o experiences depart from large Latina/o issues when taking in-group racial discrimination, ways of speech, and histories into consideration. These experiences do not always overlap with African-American disenfranchisement though in some cases they do.

Latina/os have a particular cultural citizenship in the U.S. while also being excluded in a number of ways from U.S. society. Such exclusionary examples include low political representation despite large population, fights against bilingual education despite the community’s demand for it, and assumptions of persistent foreignness. One argument from a Black consciousness angle is that at least the large majority of people assumed to be Latina/o are *seen.* However, Black Latina/os are not *seen* (in the same way) and that their stories are not usually included in Latina/o narratives. Thus, there can be a two-fold exclusion. This is the point where Black bodies who are *in* particular Latin American countries or *in* the U.S. as part of a larger pan-ethnoracial group becomes most important. U.S. AfroLatina/o racial-ethnic consciousness occurs at a parallel with Black consciousness movements in the geographic region of Latin America.

In this spirit and considering myself directly and tangentially a part of both movements, I was able to attend the National Day of Black Consciousness march yesterday in Salvador, Bahia. 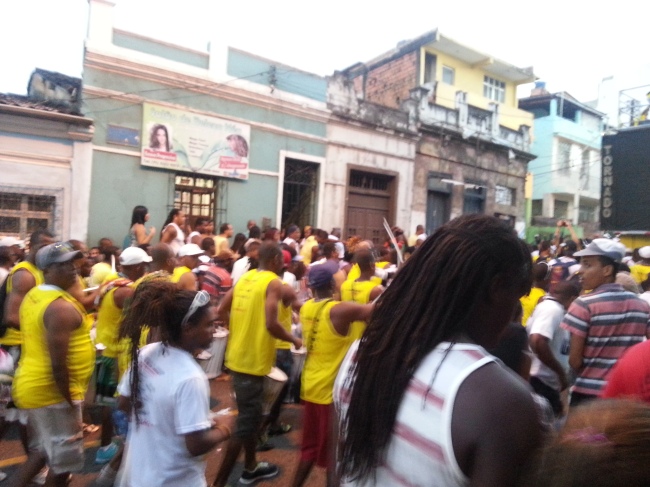 Seeing all of these Black bodies sharing in this event reminded me about the importance of not just Black struggle, but Black spirituality, ancestors, and the layered identities we embody. Even amidst the fellowship, I was reminded that there are thieves who may pick-pocket me if I’m not careful. I was reminded that Black diasporans will find each other no matter what (I met people from Egypt, the U.S., etc at the march). I was reminded of how ridiculously unsmooth and somewhat obnoxious our men can be when they want a woman’s attention. I was reminded of so many things that I could see in so many inner cities in the U.S. (Though the food, how people march with drums, and dance in the street reminded me uniquely of New Orleans – I literally have a nearly identical picture of a New Orleans parade and a Dominican celebration).

(This post was not supposed to turn into comparisons between New Orleans and Latin America but the features are so pronounced!)

In any event, these are just some preliminary thoughts to help me clear my head.

It might seem ironic that there should be a day dedicated to black consciousness in Brazil; a country with its history steep in the trans-atlantic slavery between 1594 to 1888 (the last country in the western hemisphere to abolish slavery). The seed of ‘black origin’ flourishes in Brazilian society today. Its DNA evident from the very curl in the hair to the way music is assembled, dance is expressed and cuisine prepared. So why should Brazilians have to be reminded once a year to be ‘consciousness‘ of their ‘blackness’ , if it’s part their everyday life?

During my stay in Brazil earlier this year, my Carioca friend and host, Patricia Castillo educated me on the importance of Dia da Consciência Negra celebrated annually on the 20th November.

Note from BW of Brazil:Last week’s third annual CONAPIR conference in the capital city of Brasília brought together various representatives of black Brazilian women’s organizations from all over Brazil. This year, a key theme was equality and representation in the nation’s mass media. If you’ve followed this blog for any amount of time you know that black women specifically and black Brazilians in general are all but completely invisible in the mass media; ridiculous for a country where almost 50 million women are considered Afro-Brazilian. At the CONAPIR conference black women’s organizations also took advantage of their gathering to announce the organizing of the BLACK WOMEN’S MARCH AGAINST RACISM AND FOR WELL-BEING that is being schedule to take place in Brasília in 2015! Back in December, BW of Brazil brought the original announcement of this marchthat earned the full support of African-American icon Angela Davis and last week’s conference…